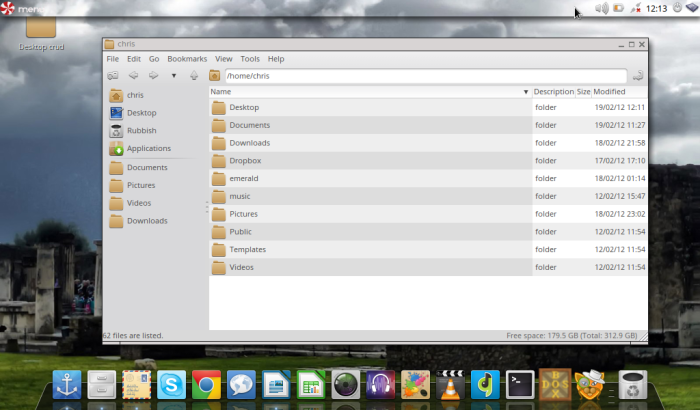 Back in the fall of 2011 I found myself looking for a netbook-format computer, which I planned use for a combination of basic online, office and media work. Online work covers the usual email, social networking, blogging and surfing duties. Nothing too heavy, I’m not expecting to use this as a media playback machine for video, nor for games. Office-related work for me is the usual emailing, documentating and spreadsheet number-logging and number-crunching work, and the occasional printed letter. Media work is the basic management and non-critical editing of a large photo library, along with occasional audio mastering work.

Getting the hardware right

Lacking the funds for the MacBook Air that I would want for such duties, I had to look around at the netbook offerings from the rest of the market. All of them seemed to come with Windows 7 Starter Edition, and all of them seemed to offer the same 3 USB2.0 ports, SD card slot and analoge video output over VGA.

Aside from the occasional Nikon RAW photo, nothing of the work I want to do with such a machine is terribly processor-intensive, but I decided that something like the 1.6GHz Intel N570 dual-core Atom processor would give a reasonable compromise between cost, battery life, speed and future-proofing.

In fairness, there’s not much user-configuration to do on a Netbook beyond picking the right CPU/battery/storage-space for the job. All the netbooks I found were offered with only 1Gb RAM, which I thought would likely not be enough to get real work done in Windows 7, Starter Edition or not. I could easily see an upgrade to 2Gb on the cards, and was happy to see that all the netooks I found offered easy access to the RAM bays to do this.

So – I tried typing on a few machines to see how the keyboard felt, and how responsive each machine was. No point buying a machine which is unable to keep up with my slow typing, from new! Within a few minutes I found myself gravitating to the EeePC line, whose out-of-the-box software was slim enough to not bog the machine down in real use, while having a keyboard I could comfortably type on without feeling like I’m constantly having to “switch modes” from my full-sized work machines, Mac and PC alike.

So – The EeePC 1011PX became my weapon of choice – mostly because it was the only machine I felt comfortable with, that also offered a dual-core processor, decent-enough battery and reasonable hard-drive space: 320Gb is a welcome improvement on the 120-160Gb I found in other machines at a similar price-point, and should give me room to spare even with a decent (compressed) music and photo library on board.

So – I got the machine home, and started out with everything as it came out of the box. Windows 7 Starter Edition was a welcome modernisation on the Windows XP PC’s I’ve owned in the past. Coming back to the Windows from using Macs for 6 years was rather a shock I’ll admit – of the first 30 hours of real use I’d ended up spending 20 of them waiting for new updates to Windows, Office or other software. Thats not a good ratio, and the updates just never stopped. Absolutely hopeless.

When I was able to get real work done, I found the machine was paging to virtual memory on the hard drive pretty much constantly. Given that this only involved use of Google Chrome and/or LibreOffice, none of which for intensive tasks, it was pretty clear that a RAM upgrade was on the cards.

Asus says that this machine is capable of 2Gb RAM max, so that’s what I put in it for the princely sum of around £15 from a real bricks-and-mortar store. In Windows 7 the difference between 1Gb and 2Gb RAM was immediate, even under the lightest of use. No, it didn’t improve startup or application load times, but it was nice to finally have a machine that didn’t noticeably bog down over hours of use.

Over the next week I found a number of niggles with Windows 7 that lead me to ditch it:

So, after wasting two days trying (and failing spectacularly) to get to a point where I was confident that I would be able to reinstall the system software in the event of a failure (which will happen one day), I took the decision to ditch the Windows install and look for something more suitable.

The above list is by no means complete, and clearly doesn’t cover every option out there. It does cover a good range I think of the different OS concepts and OS’s out there,

So far I’ve imported my documents, music and photos, and have installed:

As I’ve typed this post, I’ve found that everything seems to be working well together, with LibreOffice Writer consistently keeping up with my (not exactly stellar) typing speed. There have been a couple of niggles though: